Go Ahead & Drink Red with Seafood and FIsh

Home » Blog » Go Ahead & Drink Red with Seafood and FIsh

The Feast of the Seven Fishes, that Italian seafood bacchanal that arrives every Christmas, is a celebratory meal like no other. The wines you pour should match the flavors of the food as well as the spirit of the event. I recently spoke with Stevie Stacionis, who along with Josiah Baldivino, own and operate Oakland’s Bay Grape, one of the coolest and most respected wine shops in the Bay Area, about pairing red wines with fish.

A wine guide like Stacionis can help navigate some of the challenges of pairing with fish but here are the big three:

Coastal and seaside wine growing regions around the world historically tended to plant varietals that pair well with seafood. (You know the old adage: What grows together, goes together.) “They have an almost saltiness that pairs well with fish,” said Stacionis.

To simplify pairing options and level the playing field for less familiar wines, the wines at Bay Grape are organized by a wine’s weight or body. This organizing principle also makes it easy for guests to branch into something new.

For the pairings suggested here, Stacionis  kept in mind the adage that ‘what grows together, goes together’ while keeping in mind the sauce, spice or other influence on each dish. For dishes with classic preparations, she looked to the Old World – Italy, France, Greece – while dishes that have more pop or a newer style lend themselves to New World wines. Last but not least, Stacionis considered the potential wine drinker – do they want something a little more unique or something more accessible.

All the wines listed here are available at Bay Grape. Though this story pairs wines with each dish, Stacionis offers this advice for anyone planning a holiday meal:

“The Feast of the Seven Fishes is such a family-oriented, communal-style affair that everyone is sharing and passing dishes and helping themselves… it makes much more sense to me to select a variety of wines that can pair with all of the dishes, and let guests help themselves, experiment, and try them all with all the different dishes.” 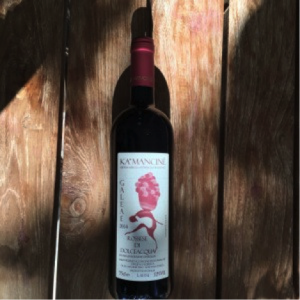 Tami Frappato IGT Sicilia – this is Sicily’s pinot noir made by a biodynamic vintner, a banging deal at $18.

Aphros Vinhao Vinho Verde –  Vinho Verde refers to freshness of wine. A certain salinity to it.

If cooking with white wine, no need to transfer to red wine, but if you do, here are two good ones.

Sipun Sansigot Krk; From the largest of Croatia’s many islands.

Dish 4: Spaghetti with Mussels and Tomatoes

Foundi Xinomavro Naoussa – this Greek red is intensely tannic until it ages and the tannins soften; the current release is 2006 and 2008; both are nice and soft, perfect.

Dish 5: Cod with Tomatoes and Capers

Stoka Teran – From the Slovenian border with Italy, near the Adriatic; green pepper and olive notes to it, play off savoriness; salty.

Marco di Bartoli Pignatello Rosso di Marco  – this is the best producer of high-end Marsala on Sicily, they make a fuller, softer red.

Dish 7: Eel with Olives and Chiles

Mas de Gourgonnier Baux de Provence – red blend, herbaceaous, a little funk to it, soft tannins, has a littlre more meat to it to pair with the cream.

Marcel Lapierre Morgon – lemon has lots of acidity so need a wine with acid to match, icon producer in Beaujolais, wines are so beautifully fresh.

Douloufakis Dafnios Liatiko Crete – a Greek varietal from one of its best-known islands; very soft and juicy and low in tannins.

Eight Sides Zinfandel Paso Robles – the dish is intense and has lots of pop, pair with this wine which drinks like a light-bodied Zin but is low in tannin. It won’t mess with the spices.

Domaine de la Pinte Arbois Rouge; from the not coastal Jura region of France but very light and savory.

Bedrock Old Vine Zinfandel, Cioppino is the ultimate California-created seafood dish; almost demands to be paired with a local wine; this one has great acidity in old vine to pair with tomatoes.

Damijan Prelit Friuli – from a cult producer in Friuli, Cabernet Sauvignon and Merlot blend, 2010 is current release; a very sexy wine, has amazing herbal and rosemary undercurrent, great with herbs.

And, if you do want to offer a white wine or two, Stacionis suggests these as terrific options:

Join the Eat, Drink, Think community – Subscribe to my newsletter for exclusive content, inspiration on where to stay, where and what to eat, and more.